What if women – key women, of a particular character – were given the opportunity to change the world? Would they imagine it differently from the men before them?  Or would they subscribe to the same power structures, the same intrigues, the same tools for resolving conflict?

These were some of the questions that motivated my first fantasy series, Eolyn Chronicles.

Grounded in the tradition of epic fantasy, Eolyn Chronicles follows the journey of one woman as she struggles to assert her destiny in a world largely ruled by men. The series consists of three companion novels: Eolyn, High Maga, and Daughter of Aithne. While each novel can be read and enjoyed as a stand-alone, you will probably have a greater appreciation of the full meaning of events if you complete the series.

Eolyn (Book I) is a story of hope after persecution. High Maga (Book II) tells of courage in the face of destruction. In Daughter of Aithne (Book III) we see the building of a new future as circumstances at last come together to allow Eolyn and her cohorts to imagine a world different from the one they inherited.

This series features a shamanistic approach to magic and will appeal to fans of epic fantasy and the sacred feminine. It celebrates the power of compassion and understanding to overcome a history of violence and oppression. Most of all, it’s a fun read, with lots of adventure, intrigue, magic, mystery, gripping battle scenes, and a touch of romance.

You can find out more about each book in the series below. Eolyn and High Maga are currently available from Hadley Rille Books. Daughter of Aithne is complete with an anticipated release in 2016. 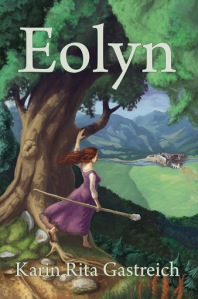 Sole heiress to a forbidden craft, Eolyn lives in a world where women of her kind are tortured and burned. When she meets Akmael, destined to assume the throne of this violent realm, she embarks upon a path of adventure, friendship, betrayal and war. Bound by magic, driven apart by destiny, Eolyn and the Mage King confront each other in an epic struggle that will determine the fate of a millennial tradition of magic. 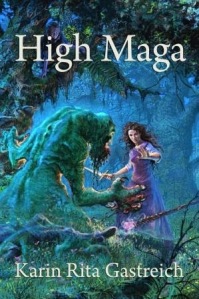 Sisters in magic, Eolyn and Adiana seek to revive a millennial tradition once forbidden to women. When war strikes at the heart of the kingdom, their fledgling community of magas is destroyed; its members killed, captured or scattered.

In hopes of defending her people, Eolyn tries to escape the occupied province and deliver to King Akmael a weapon that might secure their victory. Trapped by the invading army, Adiana is taken prisoner and placed at the mercy of the ruthless Prince Mechnes.

Even as their world is torn asunder, Eolyn and Adiana cling to a common dream. Courage and perseverance guide them toward a future where the Daughters of Aithne will flourish in a world set free from the violence of men.

“War propels the book forward, and the characters are at their best when the events engulfing them are at their worst.” –Publishers Weekly 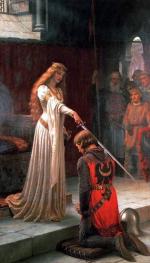 Betrayed by her own prodigy, Eolyn is imprisoned for treason. While power-hungry nobles dismantle her life’s work and honor, an increasingly desperate maga turns to a risky alliance with the cunning and ruthless Mage Corey.

Across the Furma River, Taesara of Roenfyn is drawn out of seclusion and into an ever-more vicious game of intrigue and war. Subject to the whims of a scheming uncle and the ambitions of the mysterious wizards of Galia, she struggles to assert control over her own fate.

Dark forces inside the heart of Moisehén bring a kingdom to its knees and set these two formidable women on a path toward violent confrontation. When at last they meet in battle, they will have just one opportunity to shatter the thousand-year cycle of war that holds their peoples hostage. 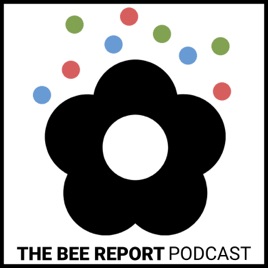