Welcome to the official site of Karin Rita Gastreich.

If you like brave heroines, troubled heroes, and twisted villains, then you’ve come to the right place. From ancient woodlands to uncharted seas, get ready to discover a world of gripping battles, heart wrenching loss, hard-won triumphs, and the ultimate magic of love.

Looking for Karin’s on-line journal? Click here! She’d love to hear from you.

Winner of the 2017 OZMA Award for Fantasy Fiction! 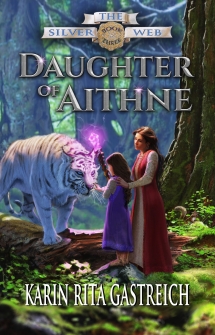 DAUGHTER OF AITHNE (Book 3 of THE SILVER WEB)

In the climactic finale to The Silver Web trilogy, threads of love, honor, betrayal, and vengeance culminate in a violent conflict between powerful women, opposed to each other yet destined to shatter a thousand-year cycle of war. Read more…

“Eolyn is a standout character….Fans of the trilogy won’t want to miss this hard-hitting finish.” –Publishers Weekly

“An enticing and elegant series finale filled with magic and turmoil.” –Kirkus Reviews.

Available now in Kindle and paperback. Coming soon in all ebook formats.

EOLYN (Book 1 of THE SILVER WEB)

Last daughter of the magas and sole heiress to their forbidden craft, Eolyn struggles to restore women’s magic against forces of betrayal, persecution, and war. Book One of the critically acclaimed Silver Web Trilogy will thrill you with dark, lyrical imagery, timeless love, and heart-wrenching loss. Read more…

“Headstrong, hopeful, and fiercely loyal to her roots, Eolyn is a character you can’t help but stand behind.” –Apex Reviews

Available in Ebook and Paperback 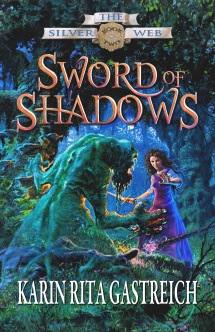 SWORD OF SHADOWS (Book 2 of THE SILVER WEB)

When their home is destroyed by war, Eolyn and Adiana enter a bitter struggle to defend their besieged kingdom against the darkest forces of the underworld. Courage and perseverance guide them toward a future where women’s magic will flourish in a world set free from violence – But first they must both be willing offer the greatest sacrifice.  Read more…

Available in Ebook and Paperback

Praise for Karin Rita Gastreich and The Silver Web

“A tale of female oppression, prejudice, and even deadly seduction, Eolyn touches on issues that are deeply relevant in our own society. At times both heartwarming and heart-wrenching, the story warns young women about the ways in which the world will try to take advantage of them—but it does so in a way that never denies them their magic.” – Apex Reviews

“Gastreich’s unhurried but engaging tale is heavily populated with characters and social themes, including feminism and bigotry….But the story’s greatest triumph is Gastreich’s prose, a consistent blend of lyrical verse and dark imagery…” –Kirkus Reviews of Sword of Shadows

“War propels the book forward, and the characters are at their best when the events engulfing them are at their worst. . . . Fans of Gastreich’s previous work will want to catch this continuation of her story.” –Publishers Weekly review of Sword of Shadow (formerly High Maga)

“The climax may not be what some readers anticipate, but it’s impactful and wholly satisfactory. An enticing and elegant series finale filled with magic and turmoil.” –Kirkus Reviews review of Daughter of Aithne

“Ms. Gastreich’s uncanny talent for truly creating a world her readers can become part of is a rare gift, and one she shares abundantly.” –Terri-Lynne DeFino, author of Finder

“The beautiful descriptions and captivating characters will draw readers in and keep them turning page after page. Fantasy at its best!” –DelSheree Gladden, author of Wicked Hunger

“Although rooted in traditional fantasy, Eolyn stretches and breaks the bounds in many ways, leading to a read that is fresh and unpredictable.” –Shauna Roberts, author of Like Mayflies in a Stream

“Gastreich’s Eolyn focuses on the emotional, political, and physical conflicts between powerful and three-dimensional characters.” –Carlyle Clark, author of The Black Song Inside

“Humour leavens the story…but never becomes intrusive or undermines the strong threads of loss, duty, romance and revenge that permeate the book. And the action is often superb.” –David Hunter, author of A Road of Blood and Slaughter

“A book to savor first at great length, and then revisit over and over again.” –Lucy Crowe, author of Sugarman’s Daughter

Book One of The Silver Web

Winner of the 2017 OZMA Award for Fantasy Fiction