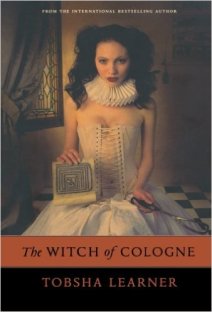 For a second, Carlos wonders what this man would look like under torture, whether his face would retain the same luminous quality. The thought excites him – the execution of power always does – and his sense of inferiority fades.

– Tobsha Learner, The Witch of Cologne

For a while now, I’ve been promising a series of reflections inspired by Tobsha Learner’s The Witch of Cologne. That project has been delayed by unexpected demands on my time, but today – with just a couple weeks to go before Samhain – I’m at last able to begin.

Let me start with some glowing praise for The Witch of Cologne. This is one of those books that’s been sitting on my shelf forever and a day; I can’t even remember where or when I acquired a copy. But once I picked it up, in the space of a few pages, I knew Learner’s novel would earn a spot on my shelf of All Time Favorites.

I would have devoured it in one weekend had I not learned by now that books like this one need to be savored; the pleasure of reading drawn out as long as possible because you know you will not find another book like this in a very long while.

The story focuses on Ruth, a Jewish midwife who is accused of witchcraft in 17th century Cologne. Out of this horrible situation emerges an unlikely and extraordinary love. Learner deftly moves the reader through multiple cycles of disaster and renewal, leaving one literally breathless at most every turn of the page. Her protagonist, Ruth, is the type of woman I love to see featured in any novel: strong, intelligent, independent, and passionate. And of course, it is all these qualities that inspire a violent need on the part of certain men in power to oppress and destroy her.

Early in the book – too early, I thought, when I started reading it – the Inquisitor Carlos Solitario makes his first appearance. What caught my attention, when the word inquisitor was first mentioned, was the visceral reaction I had. My heart plummeted into some deep, dark hole. I knew beyond a shadow of a doubt that hell on earth was about to begin, and that there would be no escape.

Among all the archetypal villains of our stories, the Inquisitor is one of the most enduring. Modern fantasy has converted many of our traditional monsters into likable personas. We now have sparkly vampires and fuzzy werewolves; funny Frankensteins, affectionate witches, and even zombies that fall in love. We have granted humanity to these former outsiders, crafting worlds, cultures, and adventures where they, too, can be heroes and heroines.

But as successful as we’ve been converting traditional villains into good guys, I doubt we’ll ever see YA novels that feature sparkly inquisitors who are the object of adolescent love.

In so many ways, the Inquisitor represents the worst aspects of human nature. He enforces the suffering and brutalization of the outsider. His villainy couples blind adherence to dogma with absolute power; hatred and fear are channeled toward the sole purpose of obliterating the Other. Guilt is seen by the Inquisitor as a foregone conclusion; his lust for violence quenched by the perverse conviction that torture is an honorable and reliable path to truth.

None of this can be twisted into some version of “good,” no matter how skilled the author or how compelling her narrative.

We like to think of inquisitors as a thing of the past, a character trope bound to heighten the tension of our fictional stories. But the sad truth is that the spirit of the Inquisitor remains embedded in our society and haunts us to this day.

Vivid examples include the SS officers of Nazi Germany and the McCarthy hearings in the U.S. Senate during the 1950s. As recently this past Sunday, the Inquisitor cast his shadow in our own backyard, when one of our presidential candidates threatened, on national television, to appoint a “special prosecutor” with the sole mission of putting his opponent in jail. In other words, he seeks to unleash the Inquisitor. Most disturbing of all, his promise was applauded by his supporters.

Our medieval tools of torture may be put away, confined to museums and rusting, forgotten, under the tides of time. But the spirit of the Inquisitor persists and is always waiting to return, to rise again to power and wield his weapons of conflict and destruction.

Maybe this is what perpetuates the instinctual dread we feel any time an Inquisitor appears in one of our novels. In our heart of hearts we know that this evil is not the stuff of mere fiction. The Inquisitor sleeps among us, and all of us fear his awakening.

One thought on “The Inquisitor”