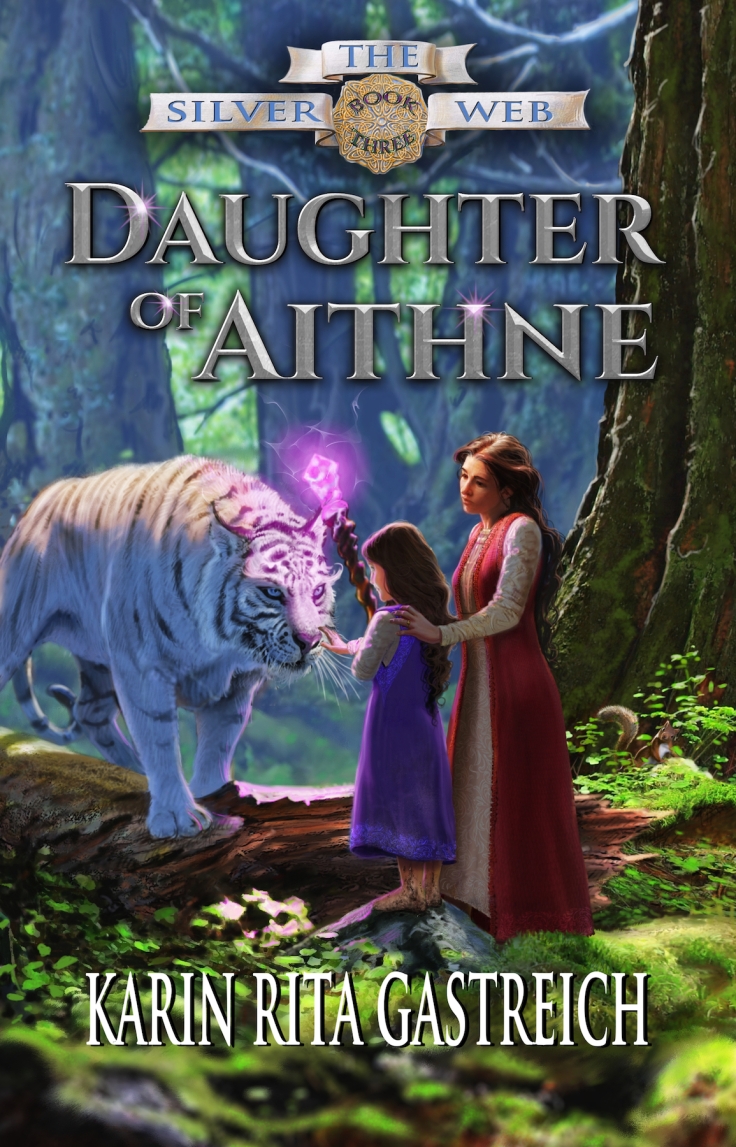 I’m delighted to announce that Daughter of Aithne will be released this spring in Kindle and print editions!

Cover art and design for this third and final installment of The Silver Web is by Thomas Vandenberg, who also did the covers for the first two books in the series, Eolyn and Sword of Shadows.  The image shows Princess Briana’s first encounter with a snow tiger, under the careful watch of her mother, Eolyn, High Maga and Queen of Moisehén. If you look closely, you just might see a nervous squirrel in the background!

The novel is now available for pre-order on Kindle. This is the climactic finale to The Silver Web, which chronicles Eolyn’s life-long struggle to restore women’s magic to her people. Will she succeed? You’ll have to purchase the book to find out!

Betrayed by her own prodigy, Eolyn is arrested for treason. While power-hungry nobles dismantle her life’s work and honor, the desperate queen forges a risky alliance with the ruthless and cunning Mage Corey. Plagued by enemies old and new, Eolyn must fight her own sisters in magic if she hopes to secure her son’s throne.

Across the Furma River, Taesara of Roenfyn is drawn out of seclusion and into an ever-more vicious game of intrigue and war. Subject to the whims of a scheming uncle and the mysterious ambitions of the wizards of Galia, Taesara struggles to assert control over her own fate even as she joins the battle to defend her daughter’s inheritance.

In the climactic finale to The Silver Web trilogy, threads of love, honor, betrayal, and vengeance culminate in a violent conflict between powerful women, opposed to each other yet destined to shatter a thousand-year cycle of war.

“Vigorously told deceptions and battle scenes…with a romantic thread.” -Publishers Weekly review of Eolyn, Book One of The Silver Web

Available now for pre-order on Kindle!

Winner of the 2017 OZMA Award for Fantasy Fiction